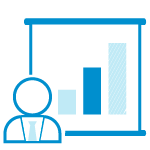 Team and team leaders face quite a lot of different challenges. Most challenges refer to internal (from a team leader or/and a team) or external (from people and situations) categories. Obstacles usually happen during a crisis and changes. For example, they arise at the beginning and ending of work and/or programs and during a team’s transition. The aim of this paper is to identify four major challenges faced by the team and its leader and provide recommendations for overcoming them, using personal experience, to get the team back on track toward success.

As the lack of leadership and the absence of different interests and skills played a crucial role in the team development, these two challenges need a more detailed description.

Insecurity, defensiveness, and indecisiveness of the team leader led to the absence of strong leadership in the team. In particular, the team members who firstly hoped to find support from the team leader gradually realized that could not rely on him. Therefore, they lost motivation to participate actively in teamwork over time. In addition, people did not understand the mission of their team, and they started performing their duties poorly. Besides, inappropriate behavior of the team leader caused the emergence of a new leader among the team members.

The team members were not chosen correctly because they possessed similar skills and interests. They belonged to different types and could not consequently communicate well. For example, there were more people with introversion preferences than those relied on intuition while making their decisions. This challenge appeared due to methods during the selection stage. In particular, it would be effective to apply the MBTI instrument (Hirsh, Hirsh, & Hirsh, 2003). Poor communication and misunderstanding evolved and resulted in low productivity of the whole team. In addition, the team leader seemed to lack a vision which specialists he needed for completing a project. Therefore, he did not develop requirements for candidates. As a result, most people did not possess the necessary skills for completing the job, for which they were taken.

As for the lack of diverse skills and interests, I would recommend to hire people after completing the MBTI developed by Briggs and Myers. When the team is already formed, this instrument is also useful because it can demonstrate which people can work together well and which members show higher productivity working alone. Besides, it helps the team leader distribute tasks between people (Hirsh et al., 2003). Apart from that, I would advise to exchange team members from different teams within one organization so that to gather employees with more diverse skills and interests.

The decision about acknowledging the team members of challenges depends on the kind of obstacle. In case of the lack of leadership, it is not appropriate because the team members feel this obstacle themselves. Moreover, acknowledging employees that they have a weak leader would lead to appearing even bigger worries and instability within the team. Therefore, if there is a lack of leadership, a team leader should hide this from people and start creating a strong position rapidly (Thompson, 2008).

As for another challenge, it is reasonable to acknowledge the team members about it. Hence, they would understand why they have issues during working on projects. In addition, it can motivate employees to improve their skills and enrich interests in order to increase their chances to stay in the team (Thompson, 2008).

As for my personal experience, I was a member of a team with a lack of leadership. Our leader was also insecure and could not take serious decisions on time. Other team members and I suffered from anarchy. Thus, one of my colleagues decided to lead us. This provoked tension between him and the official team leader. However, if the team leader applied my recommendations, the situation would improve. On the other hand, I realize this process would be complicated because the team leader would have to work on his personal issues. In particular, it is very hard to increase self-esteem and stop defending from negative feedback. In my situation, the team leader did not manage to do so. Therefore, another person with better leadership skills replaced him. I believe that is also an effective solution because it is not appropriate when the whole team could not work effectively because of one unsuitable person. As for 360-degree feedback, it was not applied in my team. However, I believe that it is not difficult to introduce it, but the team leader should be able to analyze all the received data objectively and change the team’s work if it is reasonable (Thompson, 2008).

As for using the MBTI instrument, I have not experienced it my team. I used it only for self-assessment while studying at school. Nevertheless, I believe it would not be difficult to follow this recommendation. The only obstacle can arise during the implication of the result. Thus, it can be hard to find people that belong to types that fit each other. Besides, candidates can give unfair answers during completing tests (Hirsh et al., 2003). As for the recommendation about exchanging the team members with other teams within the organization, it can be complicated to follow because other team leaders might reject to give their people. In addition, the team members themselves can disagree to change teams.

Weak leadership appeared due to choosing an unsuitable person for the position of a team leader. In particular, this manager did not have leadership skills. For example, he was insecure in his abilities. Hence, he perceived all the critics of his team members very negatively. This deteriorated communication between the team leader and the team members. In addition, people started feeling excluded from the team because the team leader encouraged those employees who expressed only positive feedback. Finally, poor leadership led to appearing a new leader among the team members. As for recommendations, it is reasonable for the team leader to behave more confidently with the team members and listen to everybody, including those who are not satisfied. Conducting a 360-degree feedback is also helpful, but the team leader should be objective to its results and put them into practice. On the other hand, my own experience demonstrates that it is difficult to follow these recommendations when a team leader does not possess any leadership skills.

As for the second challenge, it happened mostly due to the ineffective process of selecting team members. This issue can be solved by training the existing team members or hiring new people. I believe that it is not difficult to follow these recommendations if the team members are interested in staying in their team. In addition, conducting the MBTI can facilitate this process.

The decision about acknowledging the team about challenges is also important and depends on the type of issue. In particular, if the team members can help solve the problem, it is reasonable to inform them. If this information can only worry people, it is better to hide it.