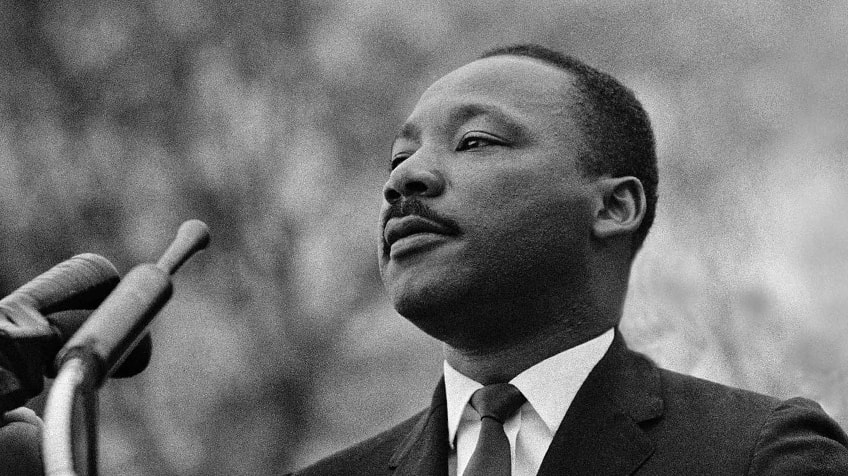 Martin Luther King Jr. was born in a society where racial segregation was nearly complete. People of African or mixed descent (“colored”) could not attend the same schools, sit in the same parks, eat in the same restaurants, or enjoy the same drinking fountains as the white. They lived in different areas and attended different churches. If they were in need of medical care, they could not be taken to the same hospitals, where the whites were treated. When they died, they were buried in different cemeteries. When they recited the oath in court, they used to put a hand on the “Negro” Bible. While the defenders of the white society claimed that races were “separate but equal,” in reality their living conditions were quite unequal.

Studying in college, Martin Luther King was reading the works of Mahatma Gandhi and the American philosopher Henry David Thoreau. He combined their ideas of civil disobedience with Christ’s Sermon on the Mount and began to call for non-violent resistance. President John Kennedy and his brother Robert understood the need for deep social reforms and the struggle with segregation. However, they did not want to hurry up the events and asked the fighters for the rights of Colored People to wait.

According to Martin Luther King, We have been waiting for our rights given to us by God and the Constitution, for already 340 years. For those who have never been hurt by sharp arrows of racism, it is easy to say wait. Martin Luther King understood that President John F. Kennedy would make reforms only under the pressure of public opinion. That is why King wanted not only to tolerate violence but in every way to provoke it in order for the pictures of violence to enter every American home. To do this, he needed the image of a ruthless enemy. His choice fell on Birmingham, the city where racism was felt at every corner. The new campaign started in April 1963 with the sit-in. Its participants were arrested. King skillfully stirred interest: everyday cameras registered demonstrations and arrests. The City Hall achieved banning the demonstrations through the court but King went out in the streets again followed by 50 volunteers. In the streets, they were singing songs, and the police immediately arrested them.

Sitting in the cell, King wrote on the margins of the newspaper the text, which became the most important in his life. The Letter from Birmingham Jail became one of the most extraordinary documents in the history of American thought.

A number of local white priests, who supported King’s long-term goals, did not agree with his short-term tactics. They made a public statement, calling the demonstrations led by King “unwise and untimely,” and opposed King’s civil disobedience, “no matter how peaceful from a technical point of view the demonstrations were.”

The Letter from Birmingham Jail was King’s answer. He wrote it on the margins of newspaper pages. King’s words were written near the ads for pest control, and news for gardeners recalled King’s assistant, who managed to take the document out of prison. On paper margins, there was a conclusive condemnation of inaction in the face of injustice reflecting an extraordinary faith that freedom would win in the United States.

To the reproaches of the white pastors, King answered with the eternal, universal truth. King, who was accused of the fact that he was an outsider, fomenting tensions in Birmingham, said that in the face of oppression there were no outsiders. According to King:

Injustice anywhere is a threat to justice everywhere. We are caught in an inescapable network of mutuality, tied in a single garment of destiny. Whatever affects one directly, affects all indirectly. Never again can we afford to live with the narrow, provincial “outside agitator” idea. Anyone who lives inside the United States can never be considered an outsider anywhere within its bounds (King, n.d.).

Speaking about tension …there is a type of constructive, nonviolent tension that is necessary for growth. For those who have not suffered unduly from the disease of segregation, any direct action will never seem well-timed. The word “Wait” has almost always meant Never. No man, Dr. King continued, can set the time for freedom for other people.

Admitting that he and his followers had indeed violated the prohibition of the District Court, King referred to the distinction between just and unjust laws stated by St. Augustine. He argued that one who breaks an unjust law to awaken the conscience of the community “is, in reality, expressing the highest respect for the law,” provided he acts “openly, lovingly, and with a willingness to accept the penalty.”

Writing from his cell, King inspired other people by his example. Being in that cell, King believed that in the United States freedom would, ultimately, win, really should win: I have no fear about the outcome of our struggle. We will reach the goal of freedom in Birmingham and all over the nation because the goal of America is freedom. Our destiny is tied up with America’s destiny. We will win our freedom because the sacred heritage of our nation and the eternal will of God are embodied in our echoing demands. One day, King concluded, the South will recognize its real heroes.

On reading the Letter the Black Americans turned pale white with wrath and millions of white U.S. citizens turned red with shame. Riots began in Alabama. Now President Kennedy could not stay idle. On June 11 in his televised address to the nation, he first strongly condemned racism: “Our country will never be free until all of its citizens become free. It’s time to act in Congress, states and communities, and most importantly, in our everyday life.” It was the end of racial segregation.

Don’t Worry We’ll Help You Out

Letter from Birmingham Jail was composed by Martin Luther King, Jr. in 1963 during his time in Birmingham, Alabama prison. The reason for his imprisonment was an organization of a peaceful protest that condemned racial segregation which was widely practiced in those times. The main message of his letter was to battle segregation and prejudice and it was written in response to eight white clergymen’s statements.

Socrates, Kant, and Aquinas had the most influence on King in terms of philosophy and he used these influences in his letter. The major goal of the famous ‘Letter from Birmingham Jail’ was not just to rationalize but to protect the right and ability to utilize civil disobedience in order to make the efforts of the Civil Rights Movement in the United States of America more efficient.

The Birmingham protest was held in the same period as the Easter shopping season and it was scheduled this way in order to boycott commercial establishments. The opinions about the protests were very different both among white and black people. It is interesting that part of the black population wasn’t enthusiastic about this protest and a local black-oriented newspaper even accused Kind of acting out of selfishness because they have seen this protest as King’s attempt to gain more publicity. Another argument against this protest is that it could devalue the slow progress that was made during the last years in the area of civil rights for black people. From the point of view of King, both the protest and his imprisonment should inspire the movement and influence the federal government to listen to the demands of the Civil Rights Movement.

In his letter, he states that he is in Birmingham because of social injustice. With his letter, he wants to make it clear that he is educated and capable to speak on the issues of racial discrimination with authority. He describes with powerful imagery, what black people are going through, day after day facing the beatings from lynch mobs and law enforcement officers.

He makes it very clear that the need to protest exists, it is strong and protests are necessary for the sake of the Civil Rights Movement’s progress. He gives examples of laws that are totally unfair but legal asserting the immediate need to change the situation. He recollects Adolf Hitler, saying the people shouldn’t forget that what he has made was considered ‘legal’ in Germany. He also expresses his fears in regards to the state of the present-day church, being afraid that it may lose its spirit and become a social club without any significant meaning’.

Buy a review of any article from our competent writers starting at just $13.99 a page. Full confidentiality and security of transactions are guaranteed

Following Mahatma Gandhi’s philosophy of passive resistance, Martin Luther King, Jr.’s‘ Letter from Birmingham Jail’ gives us the motivation to choose love over hatred. Later in 1963, King’s organization arranged a march of black schoolchildren, which received violent response from the officials. The civil rights bill which became a landmark Civil Rights Act in 1964 became the result of this march. This achievement gave Martin Luther King an iconic status as one of the most acclaimed political and moral leaders in the United States of America.